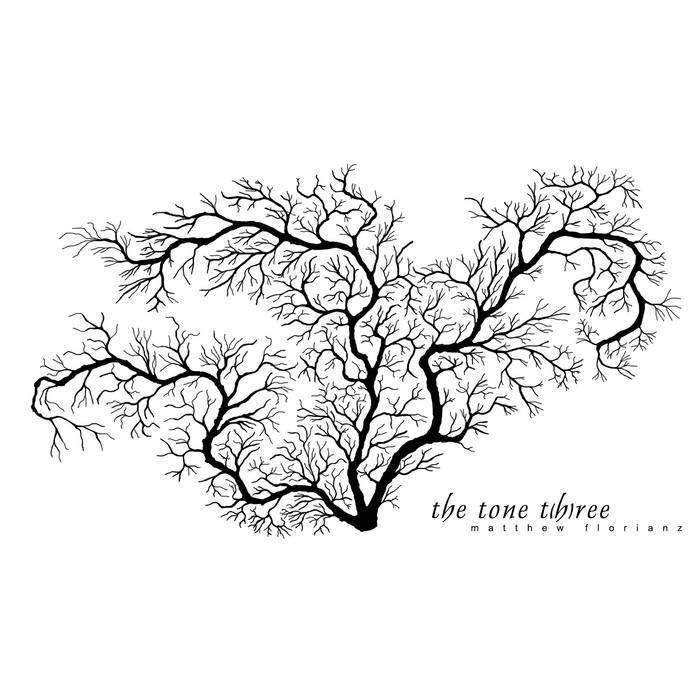 Madec Turn off the lights, close your eyes and immerse yourself in the music. Best enjoyed with decent headphones!

Google Translate: Matthew Florianz creates vast spaces full of peace and melancholy in this artfully arranged ambient work. With its mysterious, magical sound worlds, this music can let you fall deep into your own self - an almost meditative effect. Due to the gloom, however, there is a danger of ending up in a low mood from which it would only be possible to get out by disposing of this CD, but this is unthinkable due to the fascination that this album exerts on you. And so this unearthly music captivates you again and again.

Matthew Florianz's seventh full length album The Tone T(h)ree was original recorded in 2000 and released on mp3.com, then subsequently re-mastered a few years later for this H/S Recordings release. Like Three and Electronic Forest (the latter recorded with Erik t' Sas and Joris De Man), this album employs various tone colours in a droney ambient manner. The result is a gradually unfolding and partially beheld aural vision of tone ships moving across the soundscape trailing various wakes in the sea of sound.

Turn the volume up when playing this album because it's been deliberately recorded at a low level, otherwise it's a case of listening to mainly whispered sounds and you'll miss out on a lot of the detail. In fact, I think that headphones would provide the best way to listen and catch all the wispy subtleties of the music.

Beginning the album is three tone, the shortest track at just under two minutes it has an ominous quality as an amorphous eerie drone comes over the sonic horizon quickly followed by visceral sounds like alien craft flying low overheard. The longest track part five starts off with a slightly industrial and clouded rumbling and vague hints of muffled voices. Further in an organ like drone reminiscent of that on Pink Floyd's Shine On You Crazy Diamond starts up and is accompanied by higher pitched colouring weaving around the main drone. The overall sonic effect has some similarity to Exuviae's piece Silencia.

In the track part six there's a bit more going on. For the early part of this piece we hear alien squiggly sounds over the top of resonating and sometimes brooding drones. As the piece progresses the squiggly aspects become subdued, and all the sounds gradually fade away.

One needs patience to appreciate The Tone T(h)ree; the ideal listening environment has got to be a darkened quiet room. For me this album consolidates Matthew's position as one of the best ambient artists around who utilises drone elements. What, in my opinion, sets Matthew's music apart from that by most other ambient/drone practitioners is how he masterfully blends tones with a nuanced grace to form haunting musical vistas. This is among the best albums I've heard so far this year and is highly recommended.

This is the first cd from this Dutch ambient musician, of which I hadn't yet had the time to listen to. The Tone T(h)ree is a collection of re-mastered older tracks that were recorded in spring 2000. Like the tree branches featured on the cd inlay, this is tranquil and slowly morphing Eno-esque like music that has a hypnotic and inward effect. The minimal music is a quiet pool of in-depth textural music, which flows in a timeless manner. The delicately sculptured soundscapes have a strong introspective impact that draws the listener even closer into its spacious well of sound.

Part six is a real delight, and it is the best piece of them all. Towards the end of the cd the music becomes cloudier; a darker character with some occasional drone elements that almost crosses the boundary into experimental music. The closing title track is light and vibrant, and it returns the Eno like sounds, which seem to be one of the core inspirations of Matthew's music.

Special thank you:
Darren Scott for your assistance, feedback and guidance on the original CD release.
Gene Williams in your feedfback on mastering and production.